An African bishop and his herbal remedy for COVID-19 patients 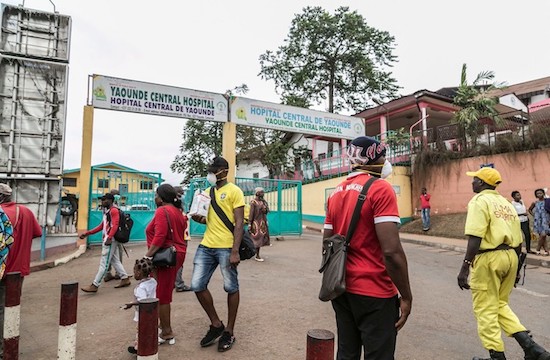 Some people wear masks as they walk by the entrance to the Yaounde General Hospital in Yaounde on March 6, 2020 as Cameroon has confirmed its first case of the COVID-19 coronavirus, a French national who arrived in the capital Yaounde in February, the government said on today. – The man, 58, has been placed in isolation in a hospital, the health ministry said in a statement. In sub-Saharan Africa, Senegal has registered four cases, all foreign nationals, and South Africa and Nigeria have one case each since the outbreak emerged in December in China. (Photo by – / AFP)

Naturotherapist bishop raises enormous hopes in Cameroon, but refuses to say that he has found a cure for coronavirus.

Everybody in Cameroon has been talking about Archbishop Samuel Kleda these days.

The Catholic spiritual leader of the large Atlantic seaport archdiocese of Duala is a naturotherapist and says he’s discovered an effective herbal remedy against the coronavirus.

That’s given enormous hope to many in this central African nation of some 25.2 million inhabitants. The disease has infected more than 1,800 people here and killed 59 of them.

Hundreds of people have flocked to Archbishop Kleda’s residence in Duala, Cameroon’s largest city, looking to get his herbal concoction.

Word of the cure first spread by word of mouth. But now it is being reported in the Cameroonian and Africa-wide media.

« Taking into account the symptoms of people who say they have coronavirus, I apply herbal recipes and these people feel better. I didn’t say I found a cure for coronavirus. It takes serious studies to come to that conclusion, » said the 61-year-old archbishop.

« I have been interested in treating patients using herbal medicines from the African pharmacopoeia for 30 years, » he continued.

« It started as a way to treat children when I was rector of the Minor Seminary of Guider, in northern Cameroon. I continued doing so when I became bishop of Batouri (2000) and I done so here in Douala, too, » the archbishop said.

Despite Archbishop Kleda’s hesitancy to call it a cure, his recipe is raising great hopes in this country where the health authorities are close to being overwhelmed by the increasing number of cases of COVID-19 infection.

For example, Paul Mahel, a Cameroonian journalist known for having led numerous debates on the pan-African television channel Vox Africa, spoke on the subject.

He made ironic remarks on his Facebook page about the Cameroonian Minister of Research’s clumsy explanation that bats were responsible for the spread of COVID-19.

« Instead of counting bats, the people from the ministry of research should go and talk to Archbishop Samuel Kleda, » he advised.

The Cameroonian philosopher and academic Alain Minkanda was equally enthusiastic.

« I pay a vibrant tribute to the life of Archbishop Kleda. He is a great man because of his physical and moral stature, as much as by his humanism, » said Minkanda.

« I commend his discovery against COVID-19; he has excelled for decades with pharmacopoeia, ever since he was bishop of Batouri, » the philosopher said.

Maurice Kamto, who lost the October 2018 presidential election, adopted the same tone in an April 27 press release through which he sent « warm congratulations to Bishop Kleda for his efforts and his product against COVID-19 ».

Kambo said this should be « a source of national pride ».

Those who believe they have been healed by the archbishop’s herbal remedy have published their testimonies.

« Three weeks ago, I had symptoms of coronavirus disease with a dry cough, a cold and a burning throat. After that, I had breathing problems, » said Irénée Ngomo, a Catholic from Douala.

He said he felt better after taking the treatment the archbishop prescribed. But Mr Ngomo was never actually tested for COVID-19.

The case of Pierre Ekassi, a bank executive in Douala, is different.

« I was tested for COVID-19 in Douala, after approaching someone who returned from Italy a month ago and is said to have recently died of coronavirus, » he said.

« I had symptoms of the disease, such as we are told on television. While I was waiting for my results, I went to see Bishop Samuel Kleda and his team who offered me free medication. I have been feeling better for two weeks, » the banker said.

According to numerous accounts, Archbishop Kleda’s experience in phytotherapy has been known for more than 30 years.

He has used plant-based medical compositions to treat illnesses such as stomach ulcers, gout, high blood pressure and many others.

But for the time being, Cameroon’s public authorities have not included the « Kleda solution » in their efforts to fight the COVID-19 pandemic.