Debt reduction for poor is based on ethical and economic plan, says Jesuit economist 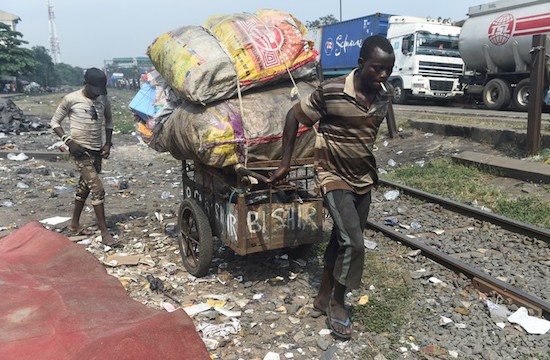 A scavenger carries wear in a cart at Badiya in Lagos, on January 22, 2019. – Nigeria scored poorly on an Oxfam list of countries making strides in bridging the gap between the super-rich and poor. (Photo by PIUS UTOMI EKPEI / AFP)
18 avril 2020 pas de commentaire

During his Easter Message this year, Pope Francis called for « the reduction, if not the forgiveness, of the debt burdening the balance sheets of the poorest nations ».

« This is not a time for indifference, because the whole world is suffering and needs to be united in facing the (coronavirus) pandemic, » he said.

The pope said it is not a time for « self-centeredness » or « division ». Rather, it is a time to work for « the common good ».

His message is resonating with people in Africa as La Croix‘s Lucie Sarr found out when she spoke with Jesuit Father François Pazisnewende Kaboré. He’s an economist at the « Kosyam Jesuit University of Science » in Ouagadougou, Burkina Faso.

La Croix Africa: With the COVID-19 pandemic, the question of forgiving or reducing the debt of poor countries has come back to the forefront. The pope has called for this, as have some African presidents and intellectuals.

Do you think this request is well-founded?

Father François Kaboré: Indeed, in his Easter message, Pope Francis launched an appeal for the reduction or cancellation of the debt of the poorest countries. This request seems to us to be completely founded on ethical and economic grounds.

On the ethical level, it is evident that, given the situation of widespread suffering that prevails in the world in general and in the poorer countries in particular, reducing or cancelling their debt would be a relief and a sign of universal solidarity.

On the economic level, although a debt must always, a priori, be repaid, it may happen that the debtor’s conditions are such that repaying the debt would permanently, if not structurally, compromise its ability to ensure its own economic survival: for example, in the case of bankruptcy (for a company) or cessation of payment (for a country).

It may therefore be in the interest of both parties (debtor and creditor) to reduce or even cancel a debt.

Can debt reduction or cancellation re-balance the world economy?

If you mean that debt reduction or cancellation can put the world economy back on a positive growth trajectory, and why not also prosperity, then yes, absolutely.

By allowing the countries concerned to keep their productive apparatus in full swing, they can continue to generate the resources necessary for their own growth, as initially planned.

On the other hand, this pandemic will probably induce a recession (decline) of at least 1.6% of GDP, according to the International Monetary Fund (IMF) projections.

However, if you mean that this will lead to a disappearance of inequalities, certainly not. Indeed, let us not forget that the IMF and the World Bank had already reduced and made more sustainable the debts of many African countries through the HIPC (Heavily Indebted Poor Countries) initiatives in 1996 and 1999.

Why do poor countries become indebted year after year?

It’s quite simple: a country, like any economic entity, gets into debt to make up its budget deficit, that is, the difference between its expenses and its income, when the former are higher than the latter. A country’s debt is thus the cumulative sum, over a given period of time, of these annual deficits.

Why does this last over time, because the government has the option of paying off this debt regularly through tax revenues, or by issuing treasury bills. Since all the countries of the world are indebted, the question is rather whether the level of debt is manageable and sustainable.

The coronavirus pandemic has exposed the flaws in the global economic system with many inequalities, especially in health care. Is the pandemic pushing us towards a more solidarity-based economy?

Very probably. At the macroeconomic level of nations, COVID-19 has brought both powerful and less powerful countries to their knees. At the microeconomic level, the virus is attacking the prince and the commoner.

So the virus has come to remind us of our shared interdependence and humanity. However, it is quite true that at the individual level, the poorest suffer and die more than the richest, such as African Americans in the United States, for example.

From this point of view, COVID-19 may prove to be an opportunity if our countries realistically face it with creativity.

It can be an opportunity for our countries to finally give priority to more endogenous development, relying more on our own resources while being open to the international arena.

In the context of a knowledge-based economy, this experience invites us to turn to the only inexhaustible resource that any nation can develop endogenously, namely knowledge.

Knowledge is inexhaustible and when we share it, we do not become impoverished. Successful therapies for COVID-19 are, for example, shared around the world.

This situation will tip the economy into a new paradigm in which knowledge, solidarity, sharing and social equity will undoubtedly have a special place at the national and international level.

Article précédent
Bishop who was uncle of DR Congo president, dies of coronavirus